We have put together a fun, family friendly event for the winter. We invite all Alumni, Current Northland Students, Teachers, Staff, Friends and Family to come out to Sequoia Lanes on Sunday, February 23rd from 2pm to 4pm for bowling and prizes. The cost is $15 per person for 2 hours of bowling, shoes and ball included. Registration is required. Registration cut off is 2/9/20 We are so excited and proud to represent all the donors that supported our drive to purchase a Home mat for the NHS Viking wrestling team. Pictured here is $6,300 Check presentation to Coach Joe Murray during our November Foundation meeting.

Thanks again to all of our Alumni and friends of NHS that helped make this donation possible. Please join us Wednesday, January 15th at 6:00 pm for the Senior Night home meet at NHS and the debut of the new mat. 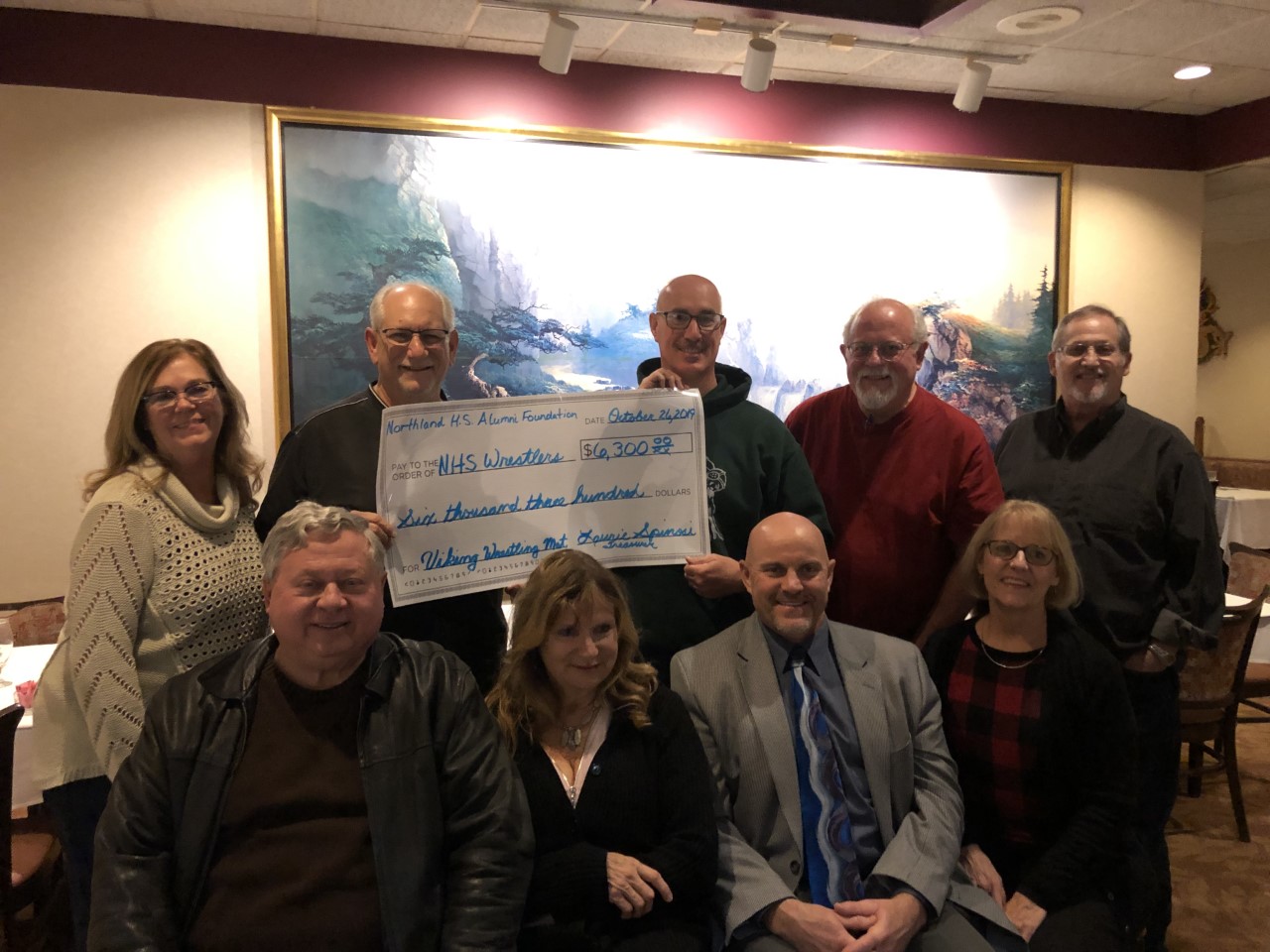 NHSAF is fundraising to raise money to purchase the school a home wrestling mat.

To raise money, we are conducting a FootballMania fundraiser. For $10 you get music downloads and an exciting, complimentary FootballMania sweepstakes game card! And now get even more chances to win with our E ticket special, buy 5 cards get one free!

Follow the link below for more information about FootballMania, and to get your cards and enter the sweepstakes for your chance to share in $1000s in prizes given away each week.

Thank you for your support!
https://www.charitymania.com/give/c903b

Come out to Quaker Steak and Lube on Sunday, September 15th and support the NHS Wrestling Team as we collect donations for a new home wrestling mat. Click HERE to print the Dine 2 Donate flyer and bring it with you, present it to your server and 20% of your food purchase will be donated to our fundraiser. As a bonus, Quaker Steak has agreed to honor the Dine to Donate flyer ALL DAY Sunday. Members of NSHAF will be staffing a table from 2 to 5 with some giveaways and a second fundraiser FootballMania sweepstakes cards for sale.

We couldn’t have asked for a better night for this years All Class Reunion. Even with the venue change for this year’s reunion, attendance was outstanding. We would like to Thank JT’s PIzza and Pub for hosting us this year, and thanks to all our NHS Alumni that came out for the fun and memories.

Foundation members can see all the photos HERE

Not a member? Join TODAY

20 teams, 78 golfers and perfect weather added up to a huge success for our 5th Annual NHSAF Golf Outing.

[Show thumbnails]
Foundation members can see all the photos HERE

Not a member? Join TODAY

Due to a scheduling conflict The First Saturday in August All-Class NHS Reunion will be held at JT’s Pizza 2390 West Dublin Granville Rd in Linworth next to Valvoline just west of the railroad tracks – don’t be fooled by the parking lot, they will have 3 valets for parking for 200 hundred cars.

$5 donations will be collected at the door. We look forward to seeing you there.

Congratulations to one of Northland’s many accomplished alumni artists, Gale Pospichel Suver, Class of ’73

NHS 2002 graduate Jonathan Moody welcomed NHSAF visitors on August 10, 2017 to the family architecture business in downtown Columbus.  Established in 1982, the company has nine offices around the country with about 200 employees, and is expanding.  Thank you, Jon, for sharing a tour of your offices with members of your Viking family, which included Principal Jason Johnson, retired teacher Alvin Simpson, several NHS students and NHS alumni.   A NHSAF meeting was held after the tour in the company board room overlooking downtown Columbus. Thanks to all the administrators, alumni and friends who celebrated this momentous occasion on at the Gala Celebration on

and to all those involved who made it a memorable event!